Some guides specify a minimum infiltration rate of around 1x10-6 m/s. Soakaways constructed in soils with infiltration rates lower than this value will generally be very slow to empty and therefore will not comply with the requirement for soakaway emptying time. However, for very small catchments they could still be used. Note that even where infiltration rates are too low for soakaways to handle the design storm runoff, they can still be useful for intercepting the first 5mm of rainfall or as part of attenuation storage.

Similarly some silts are also largely unsuitable, though this depends on the particle size. Soils with a clay/silt content greater than 40% are likely to be unsuitable. However, due to the smaller particle size of silty soils, they are less prone to becoming blocked by sediments entering the soakaway. As the sediments are likely to be a similar particle size to the silts, the sediment does not have a big impact on the soil infiltration rate. The designer may use this fact to justify a smaller factor of safety.

Sandy soils are usually suitable. However care must be taken that the sand layers do not clog up with sediments and the layer will remain stable in saturated conditions as the storm water infiltrates through the medium. Also, in the UK sandy layers often include significant quantities of clay which can reduce their infiltration rate significantly.

The soil texture classification system shown in the CIRIA SUDS Manual is not the same as the standard used in site investigation reports, though it does include a note of the equivalents, see below.

The SUDS Manual also includes a guide to the soil classification used, shown below. 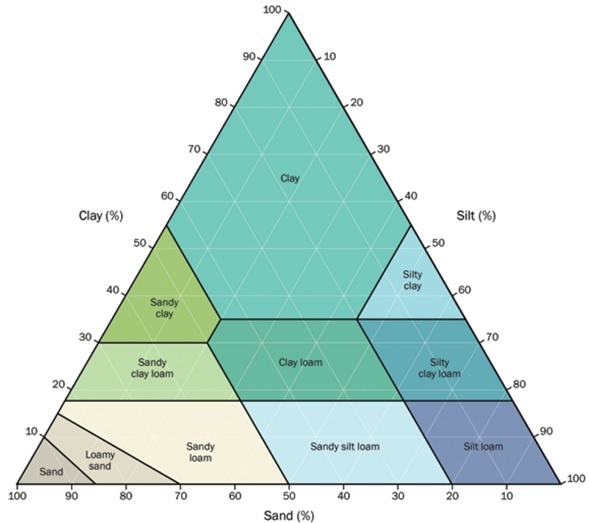 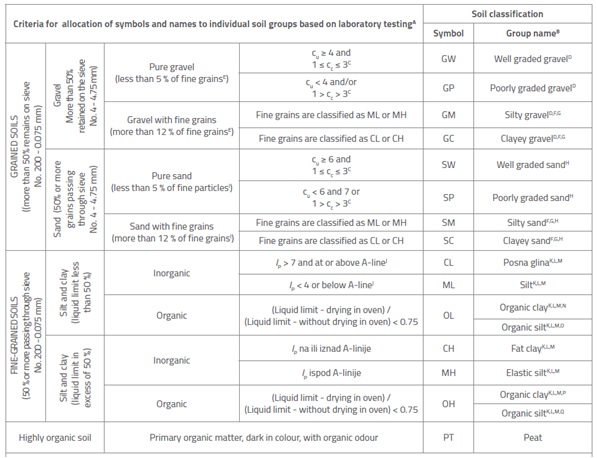 The soil gradings values are shown on the graph below. Note the Infiltration Rate is shown in in/hr. 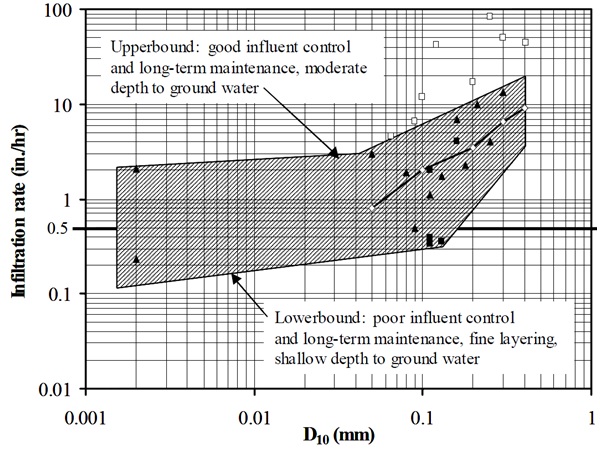 The permeability of rock layers is dependent on the precise lithology and structure of the formations. This can be quite different in the vertical and horizontal directions. In sedimentary formations of interbedded layers for example, the horizontal infiltration rate may be much higher than the vertical rate.

The overall infiltration rate is then largely dependent on the level of interconnection achieved through fractures and fissures between the layers with high infiltration rates. Where there is significant fracturing in an otherwise homogenous lithology, in some sandstones and granites for example, the infiltration rate will depend entirely by the number and size of the fractures which can be accessed by the soakaway. Examples of this are shown below.

Natural geological systems can be very complex with a number of different factors contributing to the infiltration rate achieved. Detailed investigation work will be required to estimate the infiltration rate at design stage. This can take the form of a falling or rising head test undertaken in accordance with BS 5930. This can be done when boreholes are installed for site investigation purposes. Ideally this should be done at each soakaway location as the lithology can be complex and variable. In practice it may also be prudent to test installed soakaways to ensure that they meet the required performance.

Similar typical infiltration values have been compiled for common rock formations. The actual infiltration rate achieved will depend on the homogeneity of the rock and whether any fractures or fissures are present. 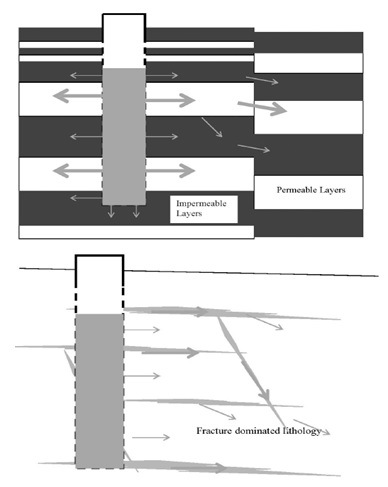 The very large ranges given above are a measure of the massive level of uncertainty in estimating a rate of infiltration from a simple soil classification. The actual infiltration rates achieved onsite are a combination of many different factors, including those detailed below; 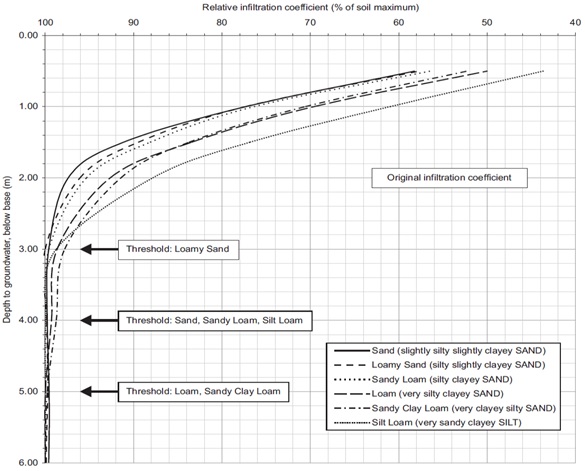 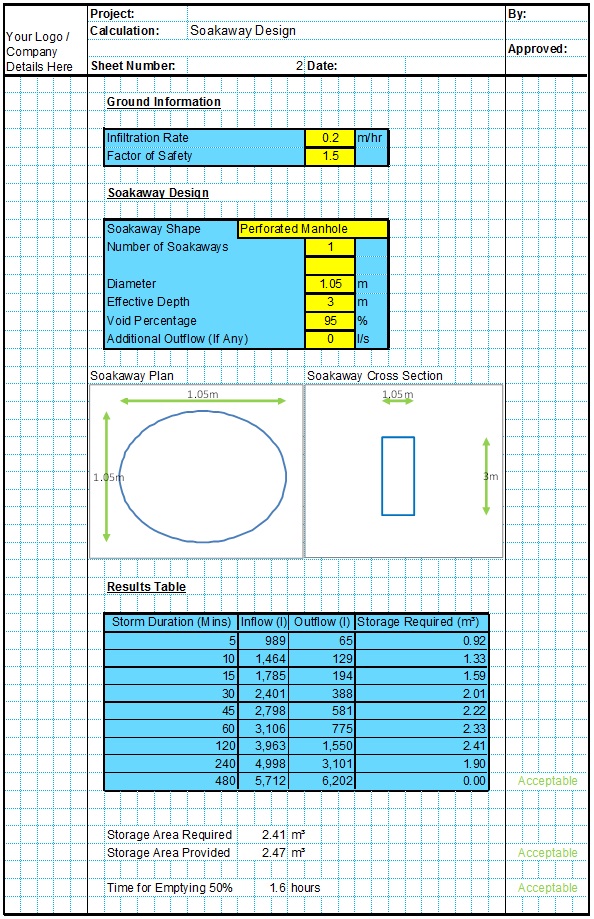 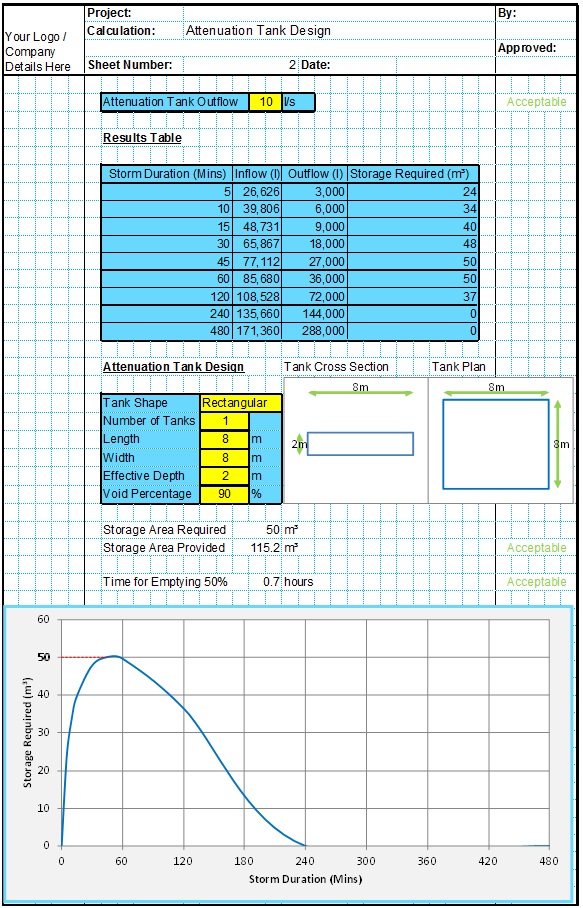 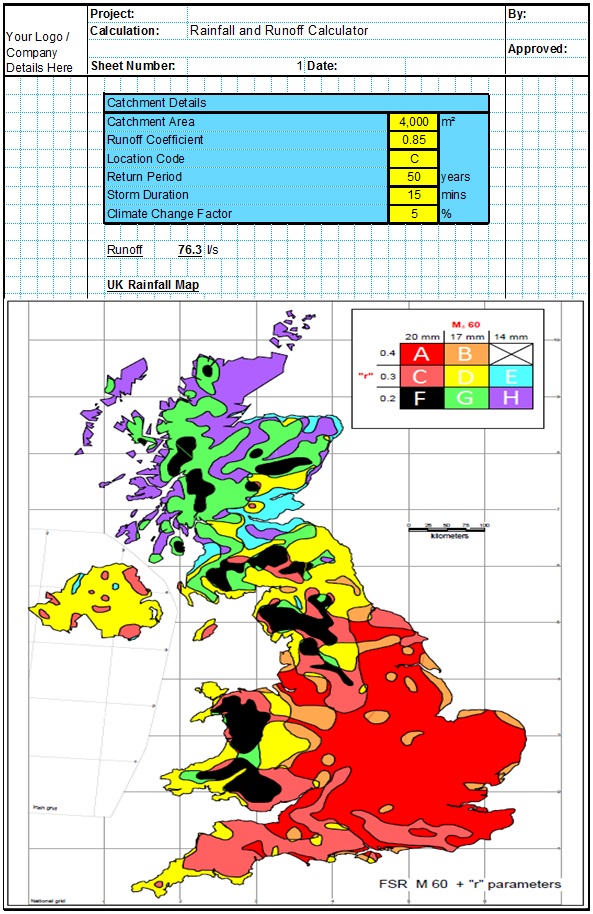 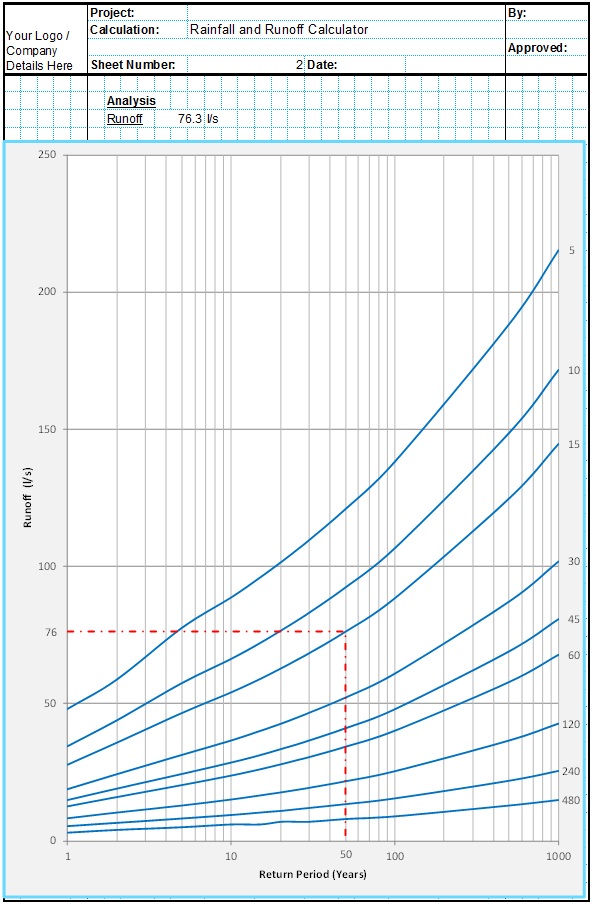