The CivilWeb Concrete Pavement Design Fatigue Models Spreadsheet can be purchased further down this page for only £10. Alternatively the fatigue models spreadsheet is included in the CivilWeb Rigid Pavement Design Spreadsheet Suite which includes 11 different pavement design methods along with a number of other useful design tools including concrete flexural strength calculators. Follow the above link for full details.

Fatigue failure occurs due to the complex geometry of the concrete matrix. As a load passes over the pavement the tensile stresses are not uniformly distributed, some will be concentrated on particular aggregate bonds due to the complex nature of the aggregate-binder matrix. This will cause this bond to break which redistributes the stresses to other parts of the matrix. The next load will break any overstressed bonds in the vicinity of the first breakage, and so on. As the aggregate bond breakages caused by each load can be tiny, the concrete pavement will be able to sustain a great number of load repetitions before the effects become noticeable. However over time and sometimes millions of loadings the concrete pavement will gradually weaken and start to fail.

Most design procedures take account of fatigue damage either through fatigue behavior models or included in empirical or calibration data. A number of fatigue damage models have also been developed separately from design equations. A selection of the most commonly used models are presented in this section.

While the PCA model is still perhaps the most commonly used fatigue equation, its conservative results (reliability around 90%) are often more costly than is required. This is particularly the case for low volume or less important roads or pavements where costs can be minimized by choosing a lower design reliability. The StreetPave fatigue model developed by ACPA from the same data allows the designer to choose both reliability level and the failure criteria. This makes this equation more suitable than the PCA equation in most cases.

The Zero-Maintenance design model was one of the first fatigue models to be developed in the 1970s. This was developed based on laboratory studies of concrete beams. The formula was first published with a 50% probability of failure as below, where Nf = Repetitions, σ= Max Stress and Sc = Flexural Strength.

The 50% probability is however too high for use in design, so a second equation was later derived from the same data with a 24% probability of failure.

The PCA developed a model in the 1980s which has become the most widely accepted fatigue model for concrete pavements. The PCA model is a semi-empirical formula linking pavement stresses calculated in accordance with the Westergaard model with the 28 day flexural strengths of the concrete measured from beam tests. The PCA model equations are shown below; 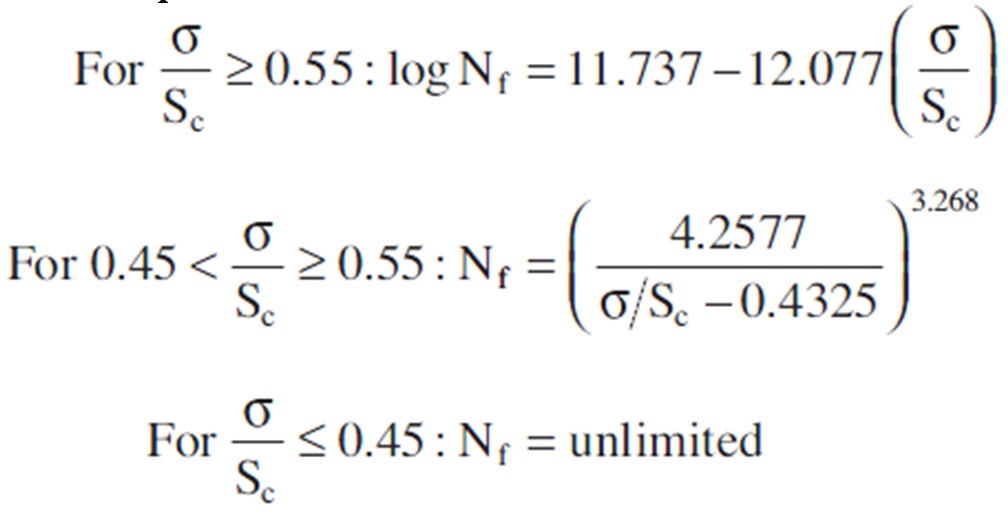 These equations show that the model assumes no damage for stress ratios below 0.45. The PCA model has been shown to be very conservative, as can be seen in the below diagram comparing the PCA model with the later StreetPave model. In some cases the PCA model can be deemed too conservative to produce an economical design. 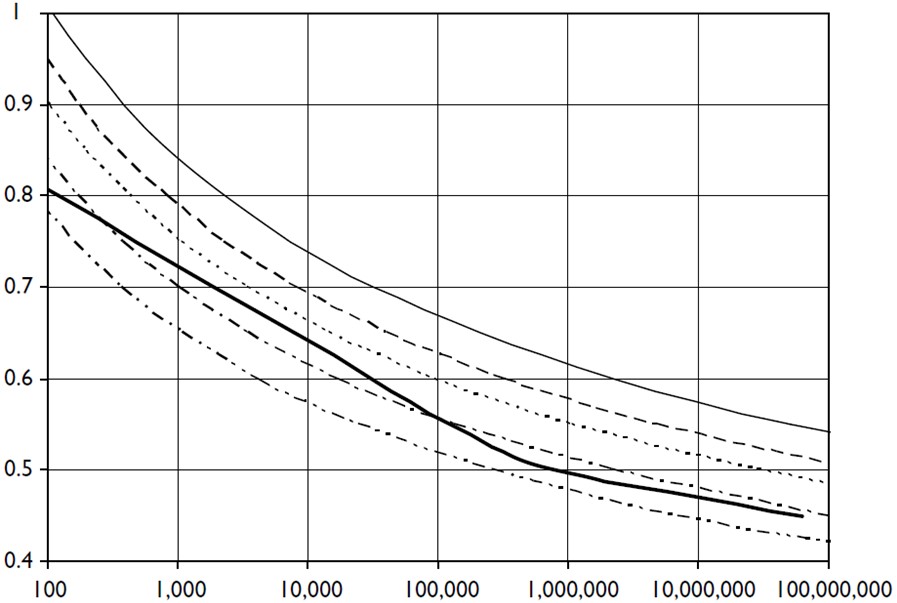 In 2005 the same data set was reanalyzed and a new fatigue equation was developed which can be used to estimate the fatigue performance at any level of reliability. The equation is shown below with (1-P) = probability of survival.

This equation assumes that 50% of slabs are cracked at failure. This might be unacceptable in some cases so a lower value around 20% is often used. This can be adjusted by the designer by replacing (1-P) with R as calculated below with Pcr = percentage of cracked slabs at failure.

The CivilWeb Concrete Pavement Design Fatigue Models spreadsheet can be used to apply a fatigue model to any separate concrete pavement stress analysis including Westergaard or finite element analysis. The Fatigue Models spreadsheet is available for only £10 or is included in the full CivilWeb Rigid Pavement Design Suite which costs only £20 for 11 different concrete pavement design methods. Note that a simplified version of the fatigue model is also included in the Westergaard design spreadsheet. 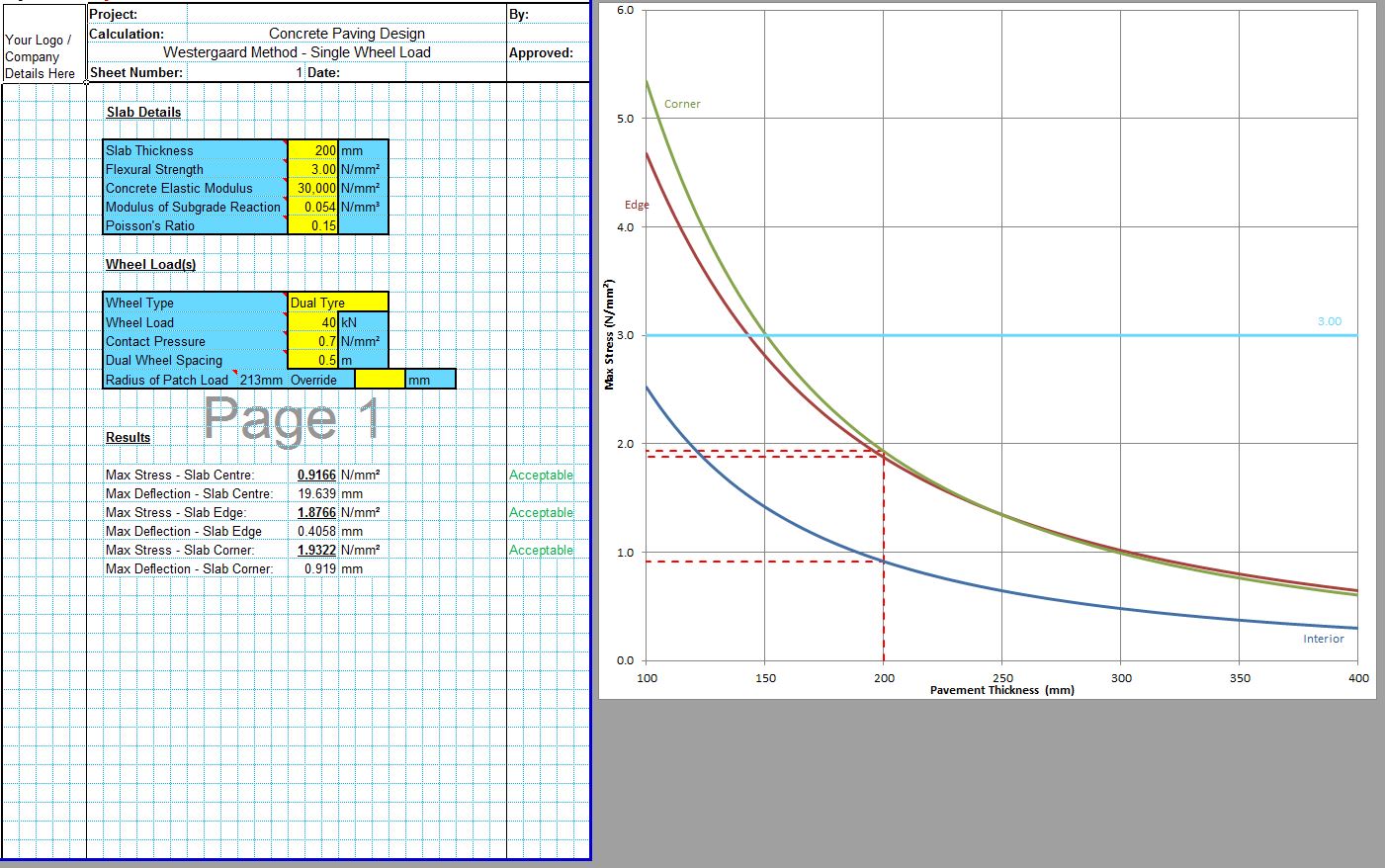 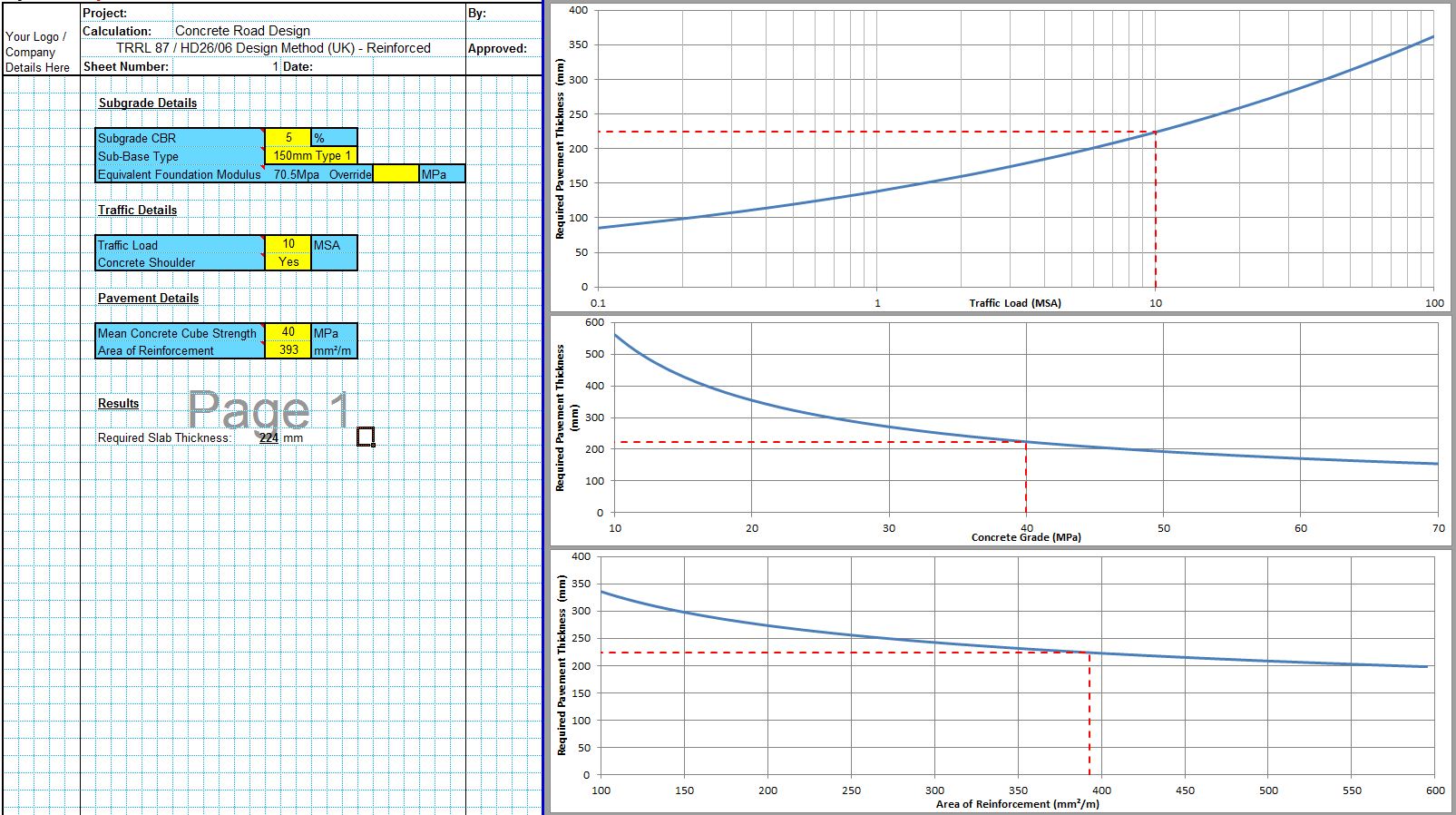 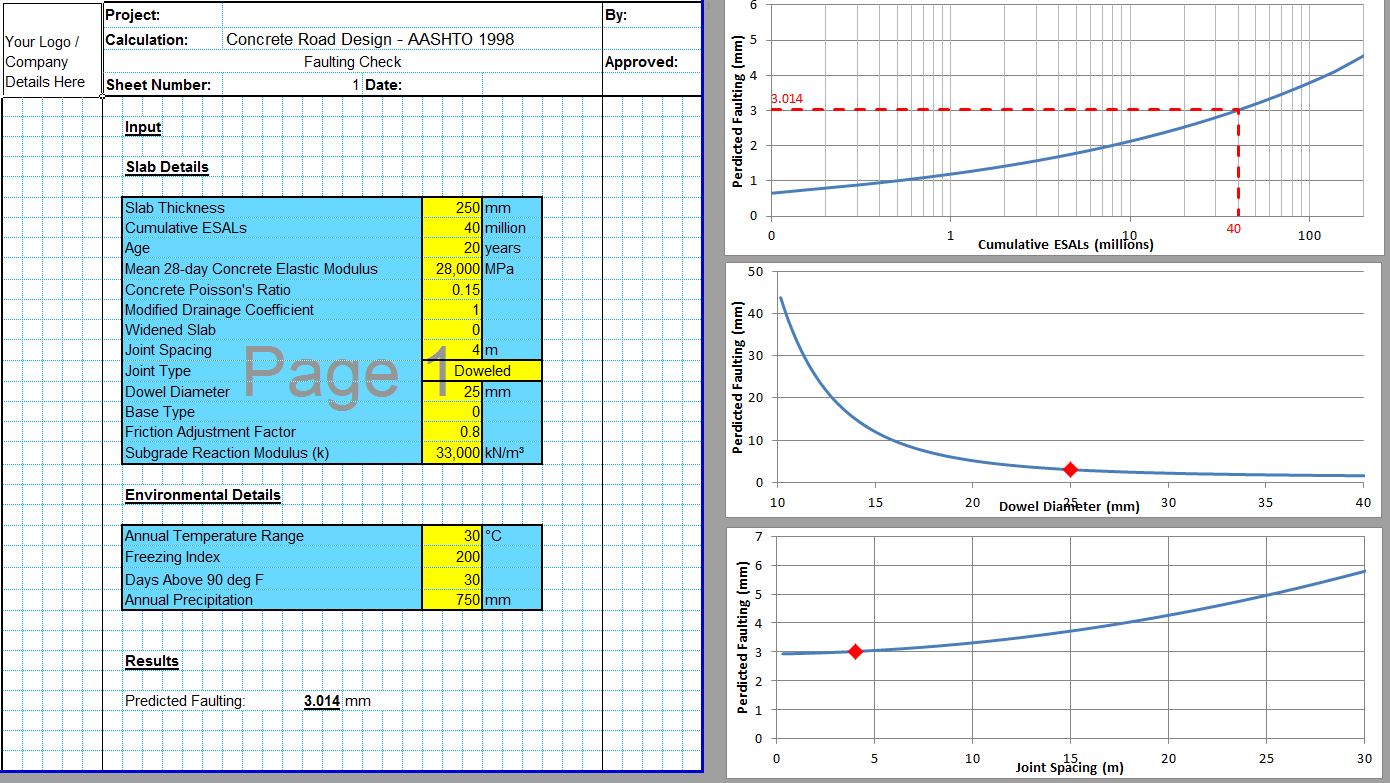 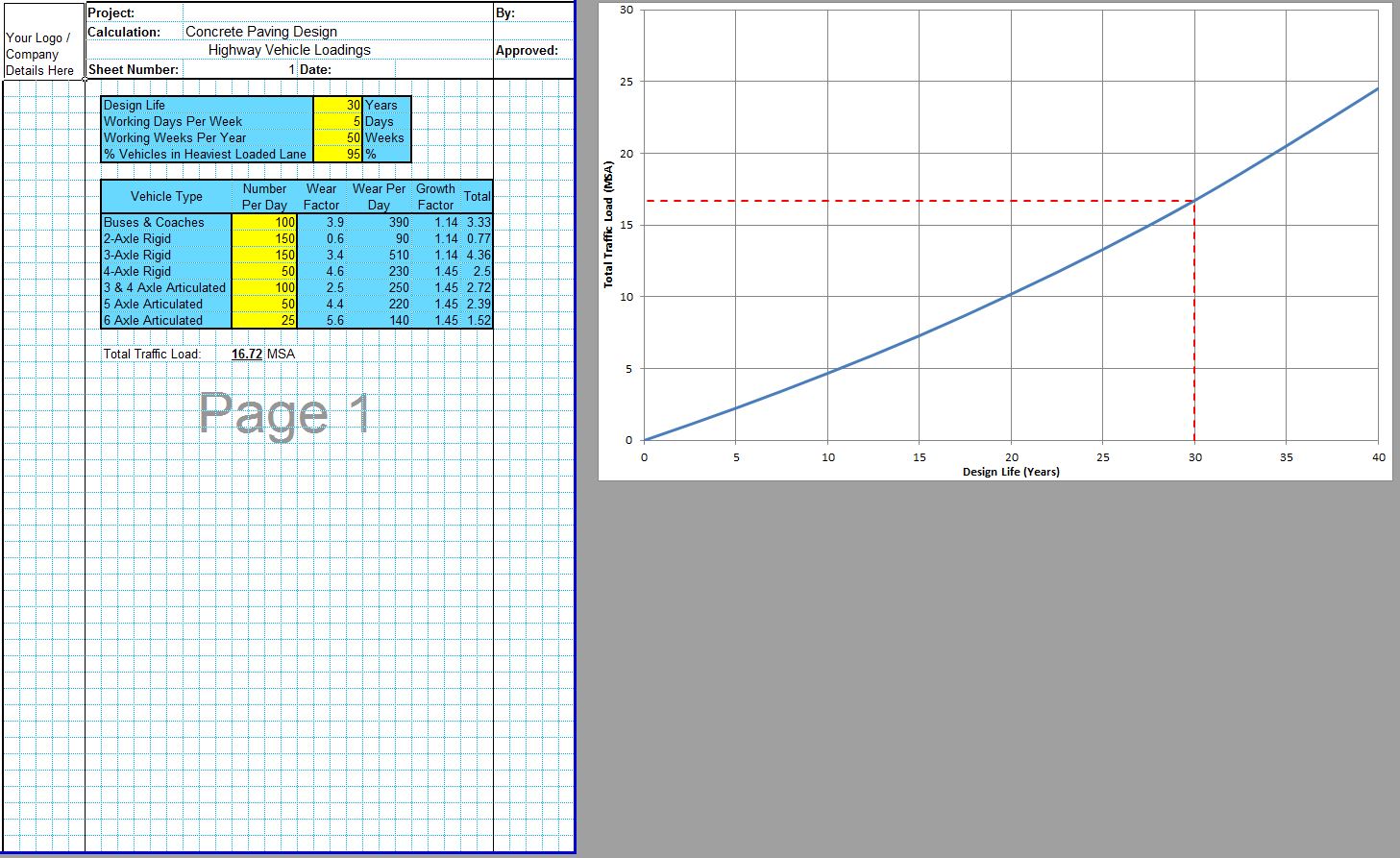 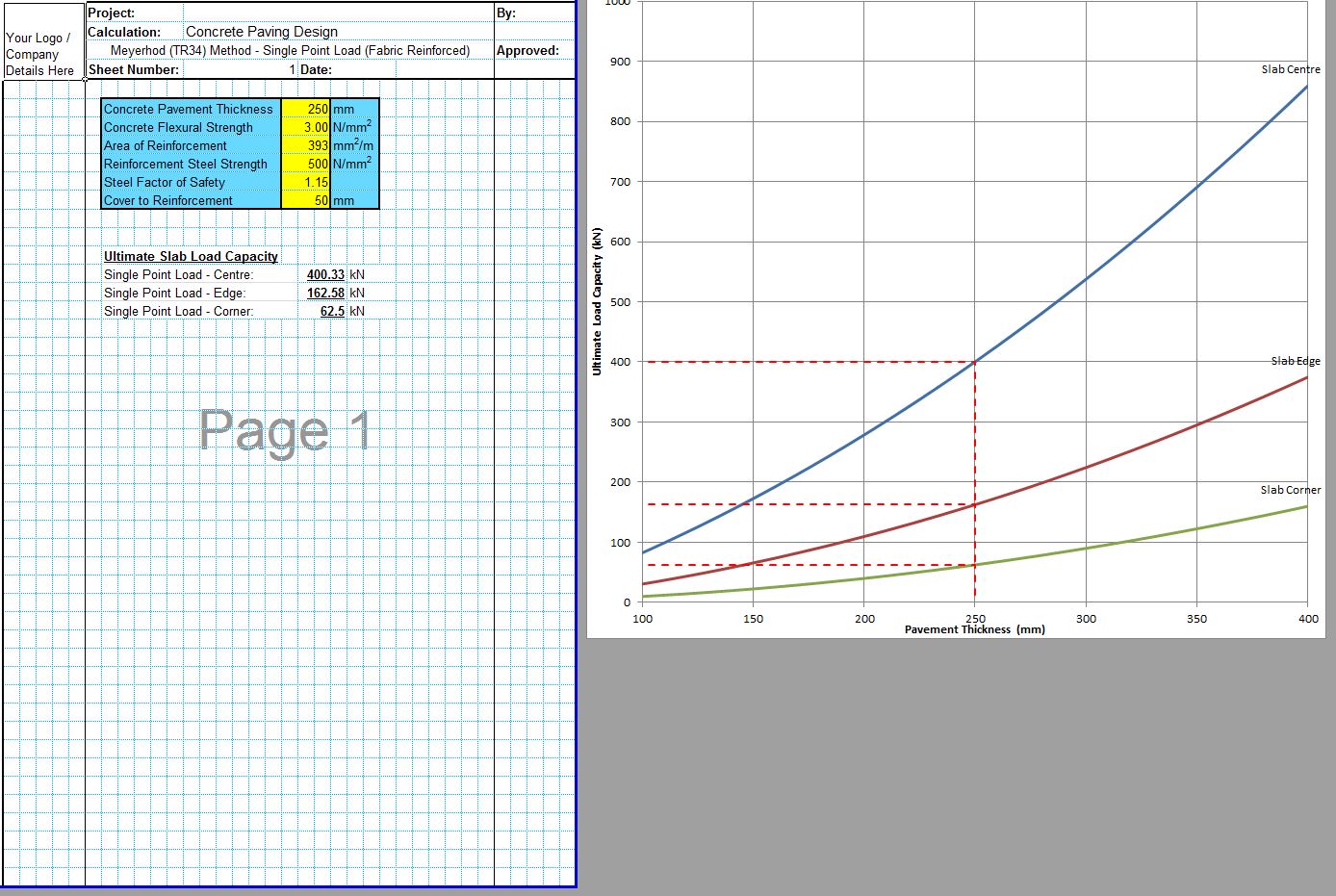 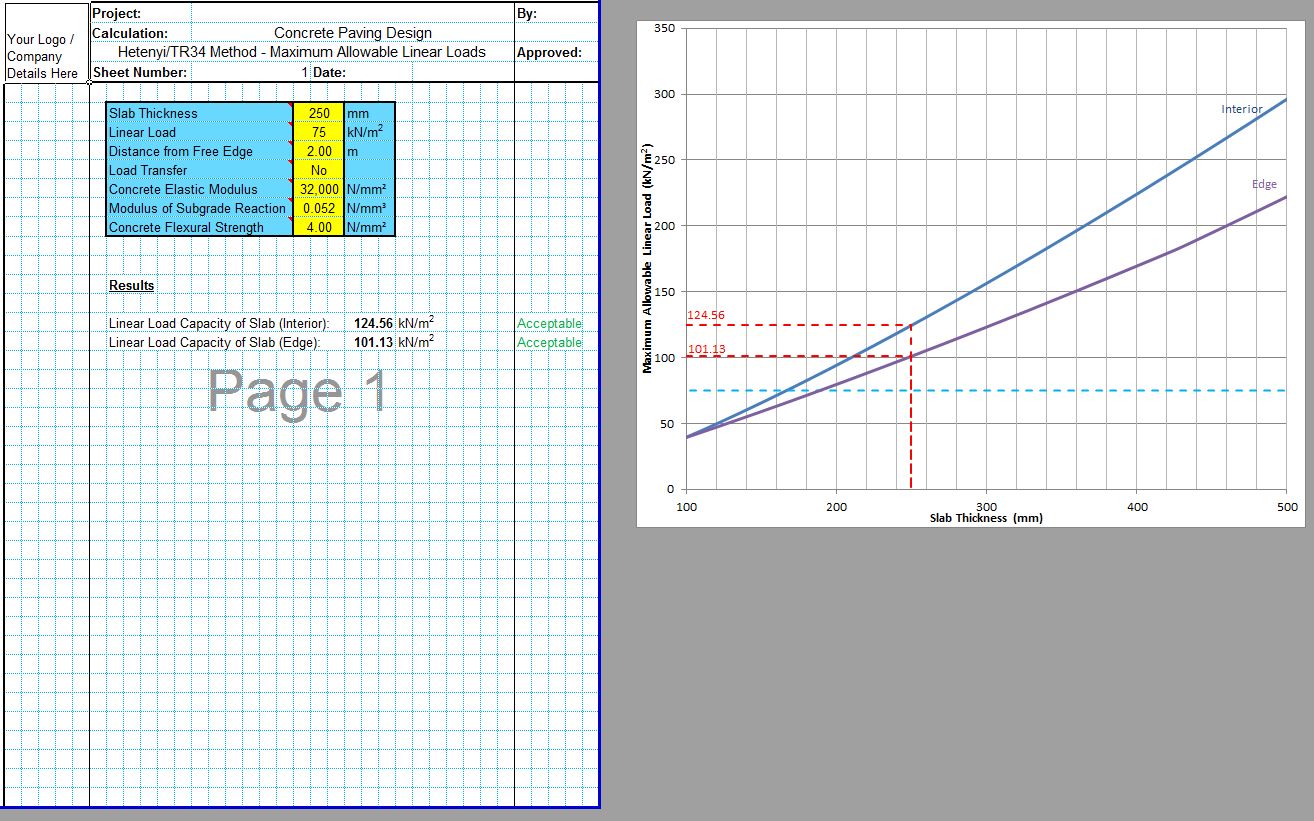 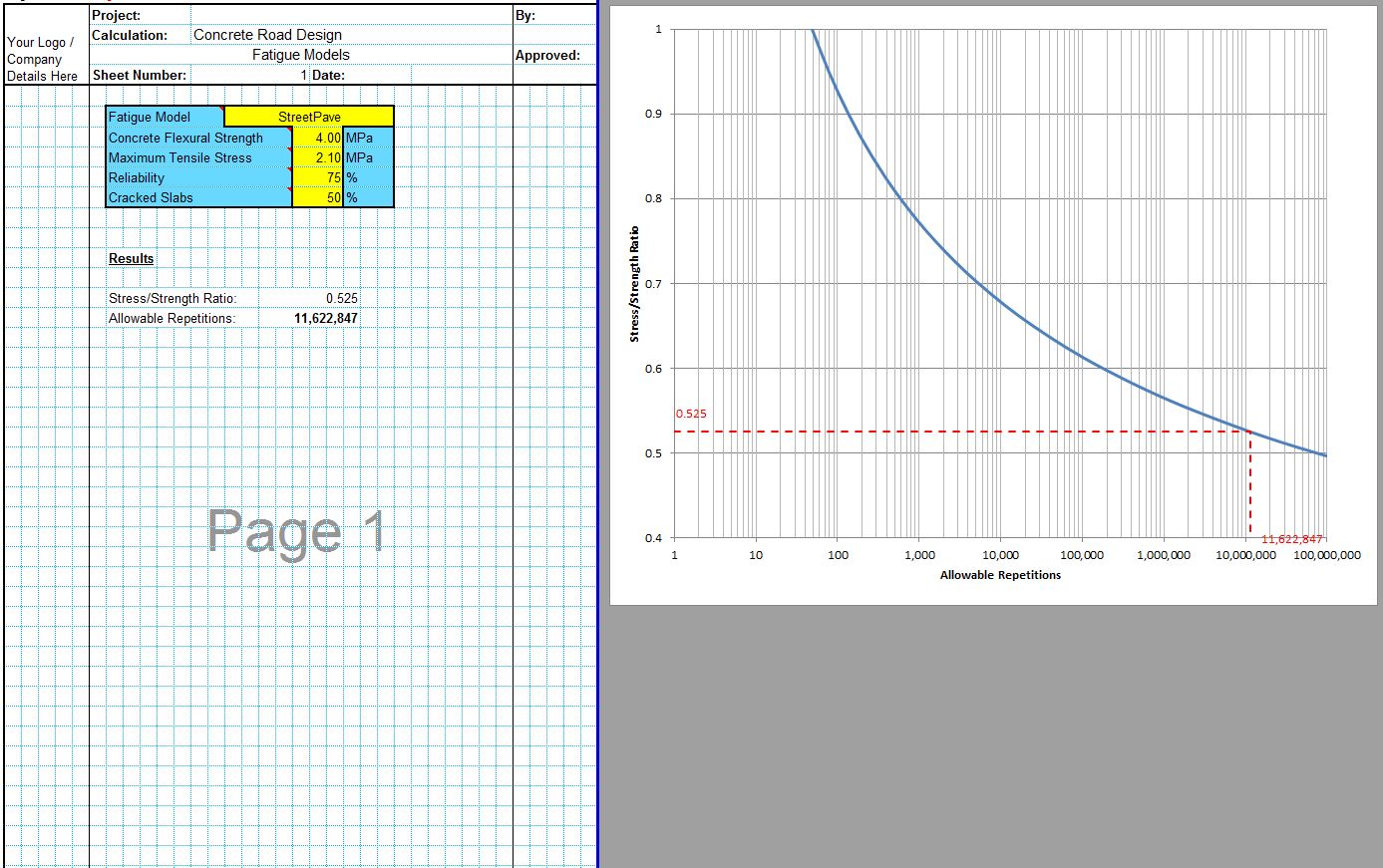 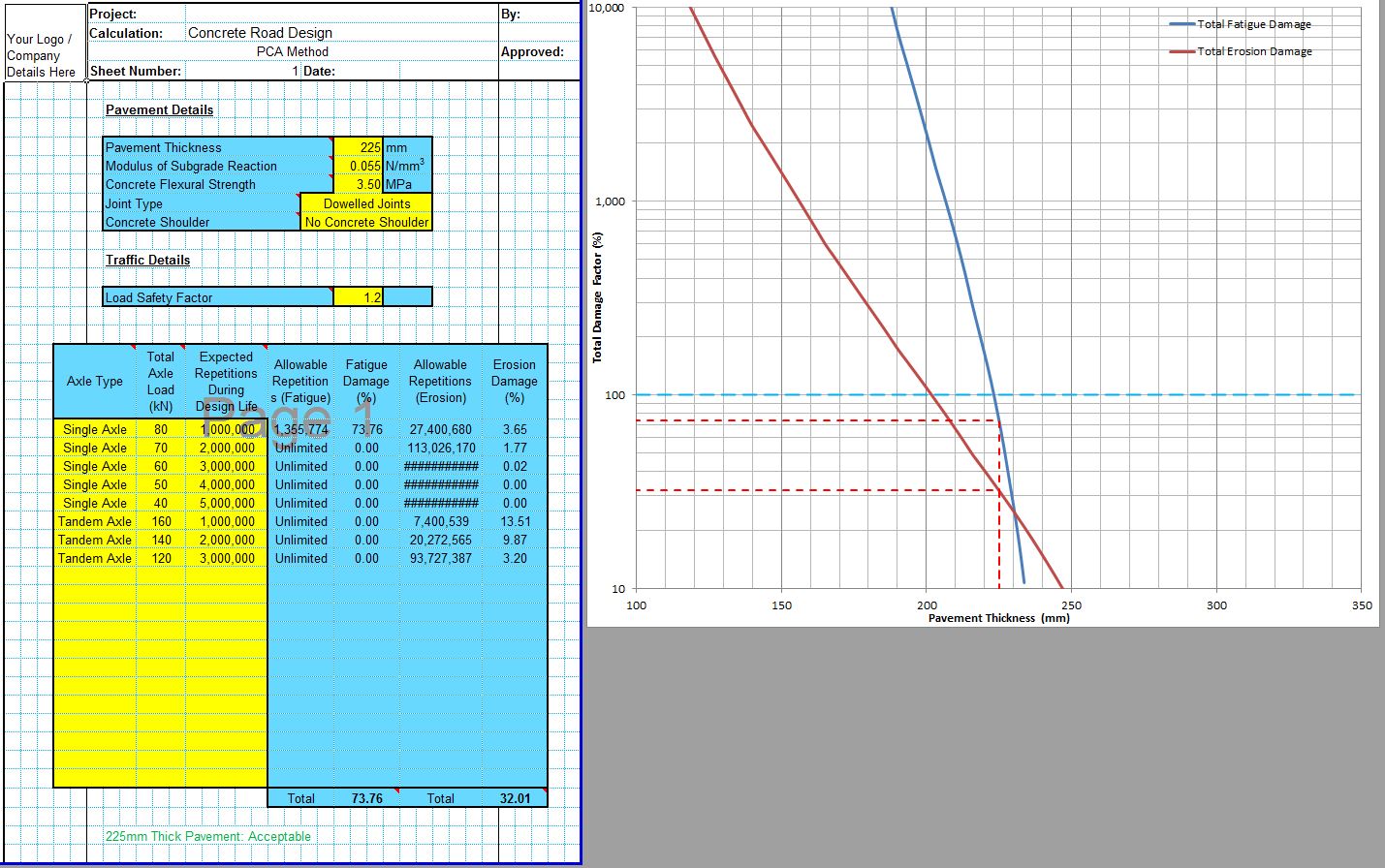 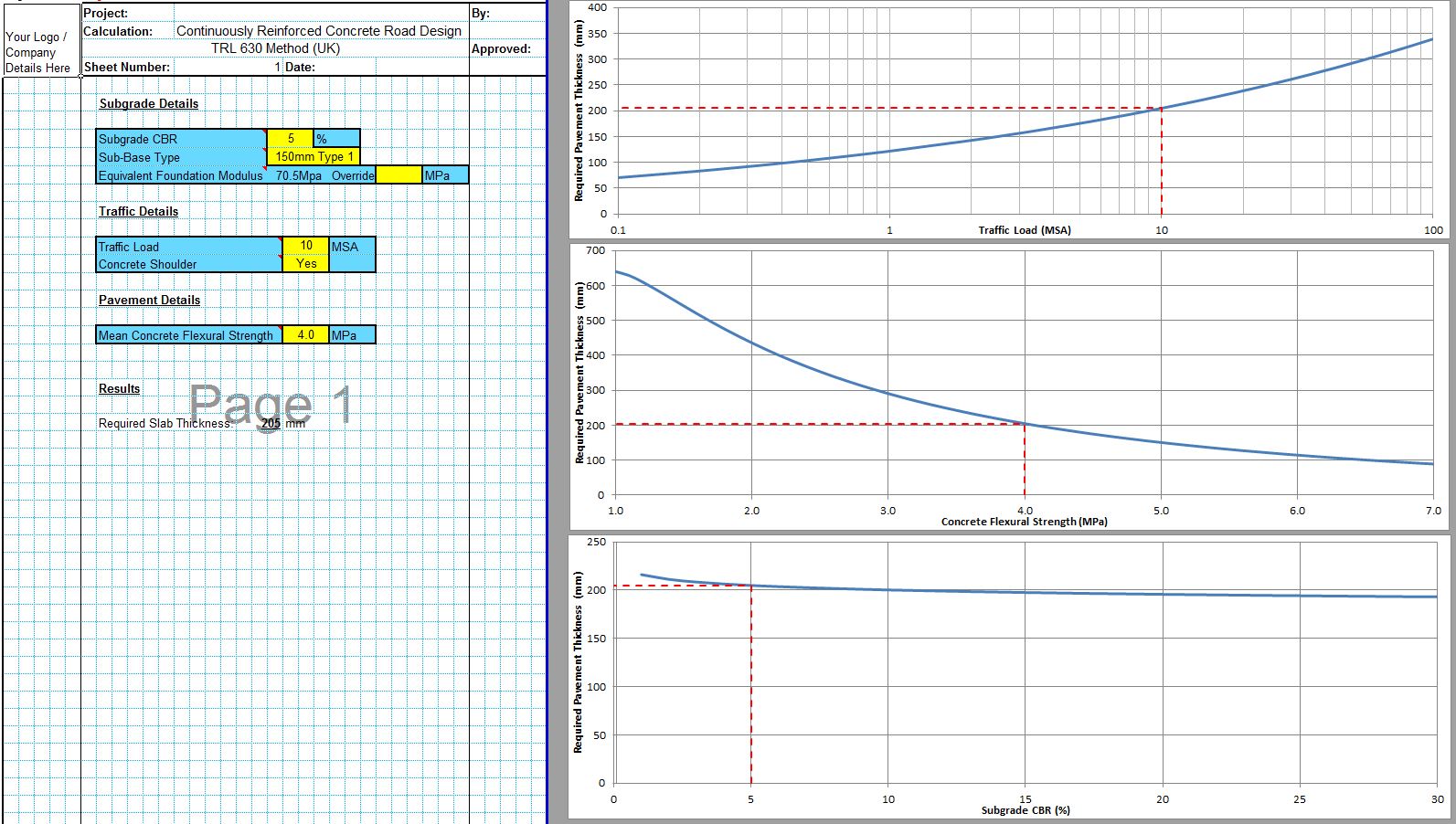